The pretty Bayamo, girl power, Cuban crime, and the best bartender in Cuba.

Bayamo is definitely one of the prettiest towns in Cuba. It’s not on the coast or in the mountains, so the surrounding geographical area isn’t super exciting, but the town itself is lovely. 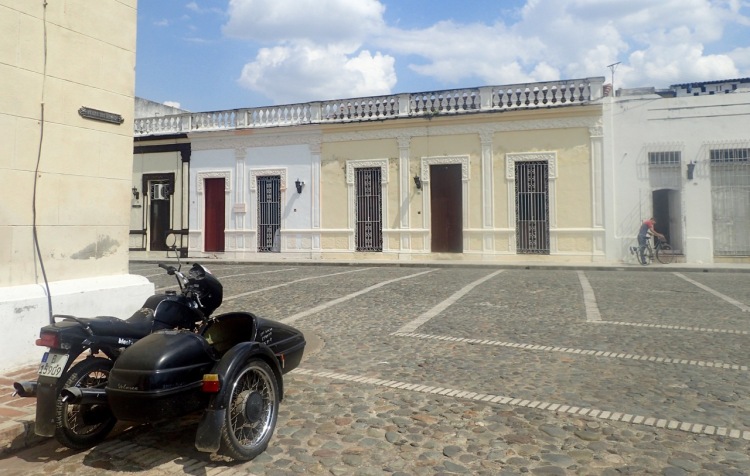 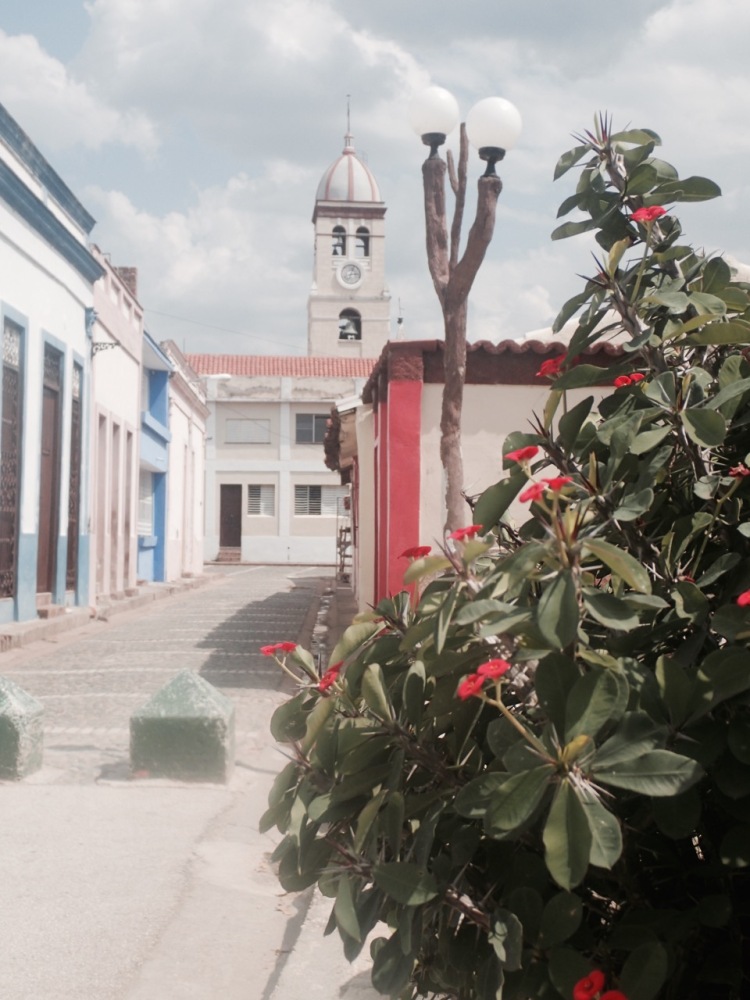 Because it’s co cute (and so clean) and historic, Bayamo attracts a fair amount of visitors. Don’t be surprised by the number of tour buses that make their way through Bayamo’s tiny streets and clutter its central square. 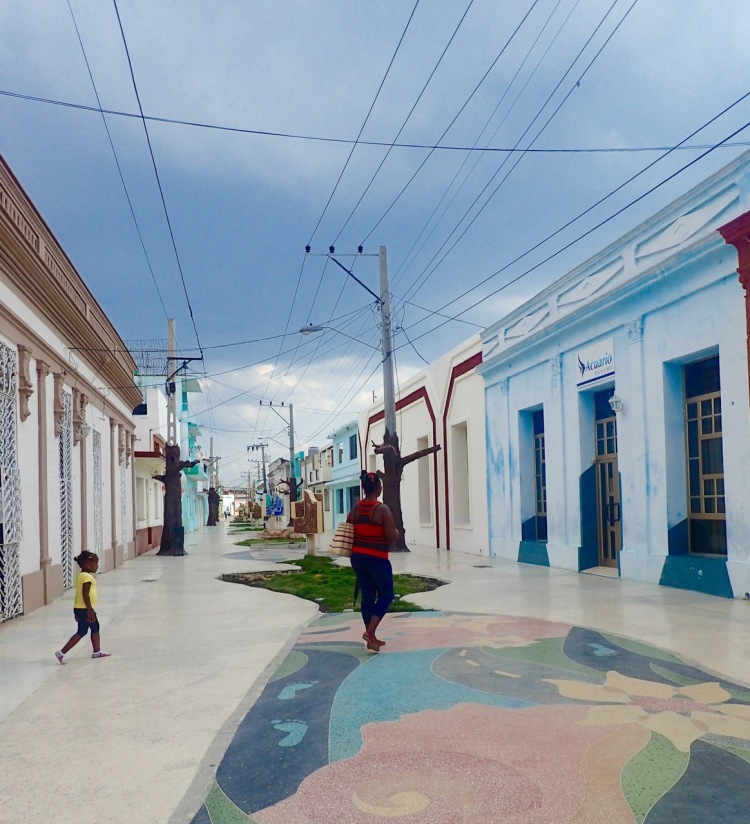 Much of the historic center of the town is roped off to vehicle traffic and there are some artsy pedestrian-only streets.

It was before 2 pm when we bicycled into town and right away we started looking for a place to stay. Nedene had a place in mind, but when she contacted the owner, she was told that the place was full. So I left my bicycle behind with the ladies (Stuart already set out on his own to find accommodations for himself), and went in search of the casa particulares signs. 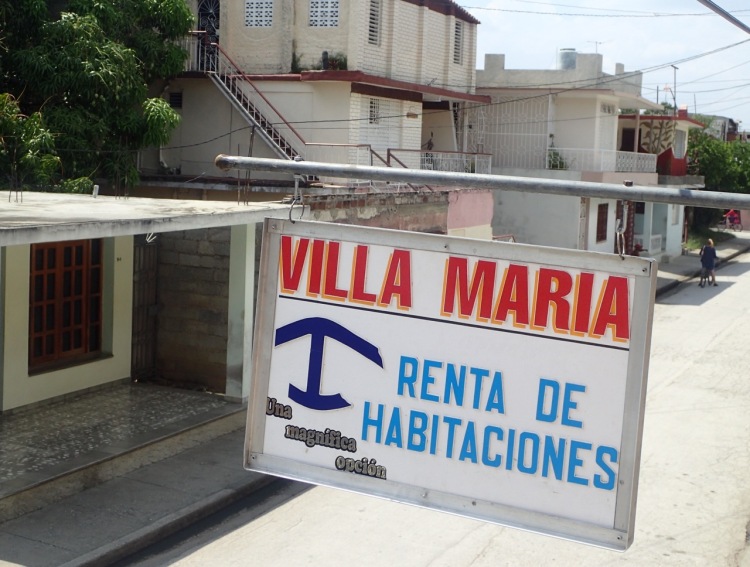 I found a really nice looking place right away on a little square, and rang the doorbell. A woman answered the door. I asked her if she spoke English and she said she didn’t. I then proceeded to ask her about accommodations for four mujeres (I felt that it was important to stress that we’re all women).

Any conversation that I ever conduct in Spanish is more like a game of charades than an actual conversation. It’s nothing that I’m proud of, but I’ve never had any formal Spanish language instruction (although I’m hoping to change that soon!). So my asking the woman for a place to stay went something like this:

“Bueno día.” (notice how Cubans don’t pronounce the “s’s” at the end of the “buenos días.”) “Yo y tres mujeres dormir aquí esta noche?” (I then stick up four fingers and count myself – the pinky – plus three more, to let her know there are four of us altogether. It’s not complicated math, but I want to be sure that’s understood. Then I fold my hands, as if I were about to lie down, tilt my head and close my eyes. The international language for going to sleep.)

I also mention bicicletas, in order to explain why I’m wearing fluorescent pink and am all sweaty.

She laughs. They always laugh. I’m not sure if it’s with me or at me, and I don’t care. And she invites me in. She says there is no room aquí, but tells me to sit down, turns on a fan for me and asks if I want coffee. I decline and she mentions the calor and offers me water. This I gladly accept.

Then she makes a phone call. And before I’m finished with my glass of water she takes me back to the door and points to a guy in a yellow shirt, who’s arriving on a bicycle.

They exchange a kiss on the cheek (all Cubans greet each other with a kiss on the cheek) and he tells me to follow him. I point to the park where I left my friends and my bicycle. We connect with Nedene, Jo and Val and then we’re off.

In Bayamo we stayed in yet another great casa particular. Yes, a man on a bicycle picked us up, but once we arrived at the casa a woman took over. The women who run the casas are one reason I’m convinced that Cuba is one of the safest destinations for women travelers.

When you arrive at a casa, you basically are adopted for however long you choose to stay there. Your host family becomes your insta-family. They take care of you not only when you’re staying with them, but they’ll make sure you enjoy the town and feel like you have a home and a family in town. 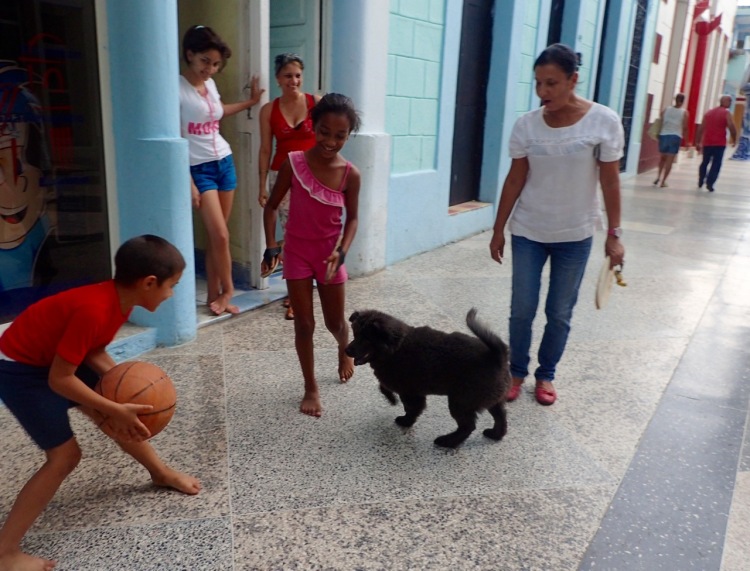 Most of the time it’s the woman who runs the household. The husband hovers in the background, fixing things, while the woman bosses everyone around. She takes your passport, your money and if you have a question it’s best to ask her.

It seems to me that women’s authority extends beyond the household. If you need something official taken care of, you’ll most likely deal with a woman in charge. Men drive, work in the fields, and are security guards. Women handle money and direct what goes where.

It’s no surprise that nearly 50% of parliamentary seats in Cuba’s National Assembly are held by women! FMC (Federacion  de Mujeres Cubanas) is a women’s organization that actively works towards advancement for women in Cuba. From the looks of it, they’re doing a pretty good job.

And Cuba is safe. Violent crime is virtually non-existent. Young women will sit and talk in parks at night. I walked around at night, alone, in just about every town we stayed in and never felt unsafe or threatened.

That’s not to say that crime in Cuba does not exist. There are the jineteros, or swindlers, and those I would stay away from (they’ll most likely try to get money out of you). They are usually men, but occasionally it will be a woman (or a couple). They’ll speak good English and offer to ‘show you around’ or get you a ‘great deal.’ They’re annoying, but easily dismissed. When one would approach me, first I normally would have to get over my shock of hearing someone speak English to me. Most Cubans (unless they work in tourism) do not speak much beyond ‘what’s your name’ and ‘where you from’ and ‘I love you.’ Once I was on alert, they’d offer to ‘show me around’ and I would tell them I already was shown around and now I’m going to meet a friend or take a nap. If offered a ‘great deal’ on cigars or rum, I’d say I’m traveling by bike and I have no interest in shopping. And just dismiss them. They never lingered very long. Once in a while one would latch himself on to one of my other travel companions, but honestly, I wouldn’t put up with their nonsense and they left me alone quickly enough.

That evening in Bayamo I met up with my travel companions at the Royalton Hotel (that’s the yellow building in the picture above). We met there to enjoy their famous mojitos.

I have to admit that I had a fair amount of mojitos while in Cuba, but the best one, by far!, was here at the Royalton.

And this is the best bartender in Cuba! You kinda suspected that it would be woman, right?