The cost of sunscreen, the ‘real Cuba’, and lotta Ladas.

Today we leave touristy Cuba behind and head on to the parts of the island where most tourists never go.

I was expecting a sharp difference, with paved roads ending and bread lines beginning, but it’s really not that different. The main difference is not seeing the tour buses full of Canadians and Europeans.

We headed for Manzanillo because we were doing a loop around the southern part of the island, making sure we ride along the southern coast. Also, Nedene has friends in Manzanillo and was bringing a gift from Florida, to drop off with them.

Today’s ride was mostly flat and again, “easy”. What was never easy about Cuba in April was the heat and the sun. Even when overcast (this was one of those mostly overcast days), it was very hot and the sun didn’t seem to care all that much about the cloud cover. My natural pigment is so weak, so non-existent, that I suffered.

Needless to say, this is why I don’t ever try to tan. My skin gets angry at any sun exposure. I was trying to be really good about reapplying too! So good, by the time we got to Manzanillo I was running out of my big bottle of the sunscreen I brought with me.

I ended up buying two more bottles of sunscreen in Cuba. What an investment! Cubans don’t use sunscreen (probably because they can’t afford it) and it isn’t easily found in stores. But I looked and found it. For 28 CUC per bottle! Yes, that’s almost $30. This is why Cuban women will walk around with umbrellas in the middle of the day. I was about ready to get an umbrella too.

If your skin is as sensitive to sun exposure as mine, do bring plenty of sunscreen with you! I’d suggest one bigger bottle (5 to 8 oz) per week. That’s what I’m bringing next time.

And then the heat… It isn’t easy to stay hydrated in 90 + temperatures. I wondered about riding early in the morning, then stopping in the middle of the day and then resuming in the evening. But our schedule was dictated by geography. We’d start out early in the morning and around 10:30 or 11 am we were in the middle of nowhere. Sitting under a tree for a few hours didn’t seem all that fun. We wanted to get to our destination, so that we could shower, unwind and sightsee.

So, forget about “pee clear.” Just pee. I think that during that first day I wasn’t peeing at all. Then I tried to be more disciplined about hydration. But it was so hot, the water in my water bottles got to this unappetizing ambient (90 +) temperature that I often had to force it down. 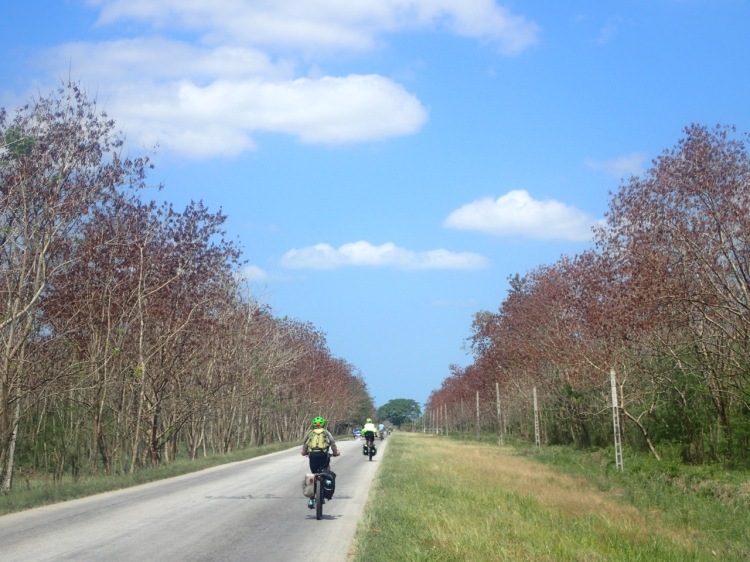 Overall though, it was probably the easiest ride of the entire trip. The road from Holguin to Bayamo was equally flat, but not as scenic and biking on a highway is not as quaint as biking on the back roads. The traffic here was busier, because it may look like a back road, but the road from Bayamo to Manzanillo is a major thoroughfare. Lots of people walking, biking, trucks, passenger cars, horses, goats and occasional cows as well.

In the picture above is a cop car. That’s the little white Lada (since the old American cars are more photogenic, you’ll usually see an old Chevy in Cuba pictures. But the most common car by far, I think, is the old Soviet Lada. Also, lots of the old Polish made Fiat 126p!).

Cops in Cuba seem completely uninterested in traffic control. No one’s pulling anyone over for a broken taillight. You’ll hardly ever see anyone using a turn signal and speeding doesn’t seem to be an issue either.

I did fall at the end of this ride. It was so hot, I was feeling a bit dizzy. As we were coming into Manzanillo, there was a bike lane, which got me all excited. I was biking on it until the lane came to an abrupt stop. Not prepared for it to end, instead of braking, I decided to get back on the main road. That’s when my wheel got caught in a gutter and I went down.

It seemed that before I even hit the ground, I had someone helping me up, asking me if I’m okay and helping me straighten out my bicycle (my handlebar stem twisted away from the front wheel, but someone fixed it right away). This is another reason why I think that Cuba is so great for biking. In case of an emergency no one will leave you to fend for yourself. If you need help, you’ll have a crowd of people helping you right away. No one wanted anything in return. As soon as they were sure that I was fine, the crowd dispersed.

After that fall, I felt that it was now time for Confessions Wednesday. But for that I needed a beer. More on my confession later… 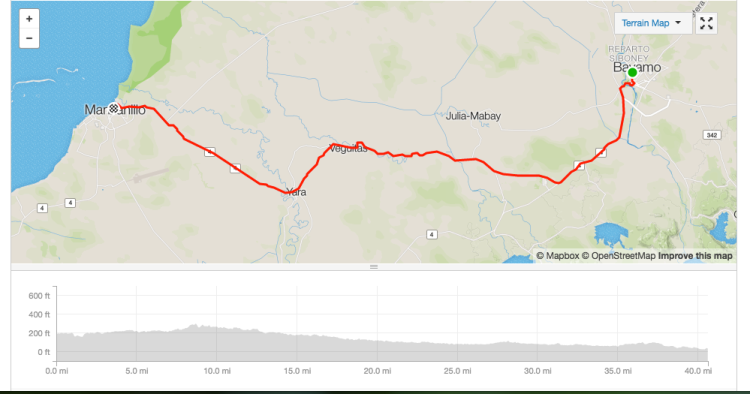