When planning today’s route we considered skipping Niquero and just going straight from Manzanillo to Pilon. But then we would have a really long day of biking. That would have been almost 90 km (which is only 56 miles, but 90 sounded long) and to get to Pilon we’d have to go through a pass in the Sierra Maestras. Sierra means ‘mountain range’ in English, so I voted for splitting the day into two and spending a night in Niquero.

Niquero is the closest town to the historic site of Granma landing. Granma (for which the province is named) was an old boat that carried Fidel, Che, Camilo, Raul and 78 other young go-getters from Mexico to Cuba, back in 1956. Their mission? To overthrow the US backed dictatorship of Fulgencio Batista, kick out the United Fruit Company (an early prototype of a multi-national corporation, which ignored local laws and operated on ‘profit before people’ principles), and also give the boot to the firm presence of the American mafia in Havana (for a fascinating read on Cuba before the revolution check out Havana Nocturne by T.J. English). A tall order for 82 dudes on a leaky boat. But guess what? (SPOILER ALERT) They got it done!

Regardless what your feelings are about Cuba and its insistence on being a sovereign nation, you have to admit that this is a great story. That’s why I thought it would be exciting to see the actual place where Granma landed.

We started out along the water in Manzanillo. We then quickly had a couple of long climbs. Until then we really didn’t encounter any significant hills, so these two weren’t easy. I think this is when I first started paying attention to the other bikes on the road. While I was huffing and puffing on my way up, in the lowest gear, I noticed that other people weren’t even biking. They were pushing their bikes up. That’s because, unlike me, they didn’t have any gears!

I will never understand why some hipsters in Seattle have single-speed bikes… As I passed all those single-speeds, I have to admit that I felt rather like someone who would bring a Tesla to Cuba. My Long Haul Trucker is swank. It’s comfortable, with super low gears and it was often embarrassing to be cruising past people who were struggling on their rusty old Chinese single-speeds.

After those initial couple of hills the ride was again smooth and fairly easy. A few rolling hills, but nothing major. 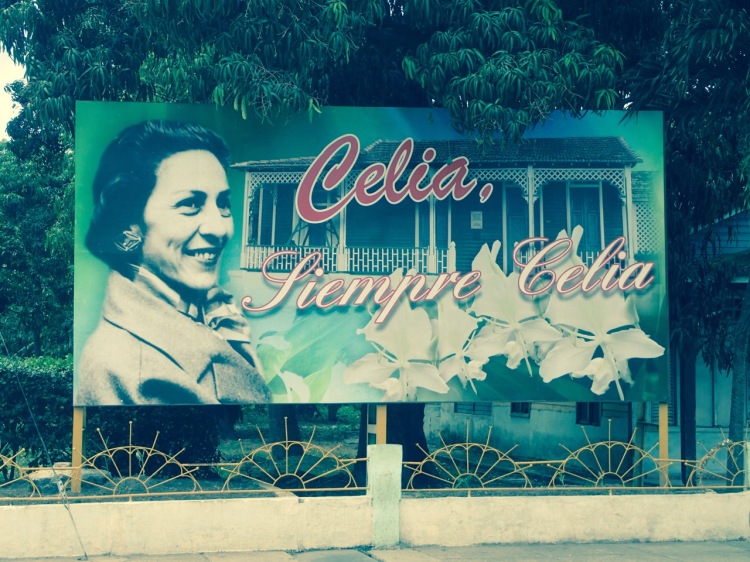 One of the towns that we passed through was Media Luna, the hometown of Celia Sanchez. I know there is a Celia statue somewhere there, but we didn’t see it. Only this one lone billboard.

I was trying to hydrate more, because the heat was really getting to me and I often felt dizzy. So this was the day I checked one of the long standing items on my bucket list: pee in the sugar cane field! (with all this privacy, there is hardly a better place when on the road in Cuba)

I was drinking my homemade electrolyte solution, but quickly realized that it was making me MORE thirsty! The emptier the bottles became the saltier the taste and pretty soon I felt like I was drinking sea water. Constantly thirsty I decided to supplement my water supply.

When you arrive in Cuba you may be convinced that getting bottled water will not be a problem. And for the most part, it isn’t. You can find bottled water in all cities and bigger towns. Also at gas stations. But once out in the country, bottled water becomes more of a rarity.

I really do have a very hardy stomach. It’s lined with the bacteria I’ve consumed as a child, when I drank unpasteurized milk, straight from a cow’s teat, and all the street food consumed throughout my travels in Asia, Australia, Europe, North Africa and Latin America. When it comes to bacteria, I don’t discriminate. When arriving in a new country, I always brush my teeth with regular sink water, hoping for some exposure. Since I don’t swallow the water, I figure that watering my toothbrush and rinsing out my mouth will be just enough for my gut to get an introduction to the local microbes. And so far it’s worked! I got a little bit of a stomach upset in Casablanca (but nothing that would stop me from sightseeing) and then my trip through Morocco was a whole lot more enjoyable! While my traveling partners turned green and blue and moaned most of the days following our stop in Fez, I was slopping harissa on everything and could only empathize and let them use the bathroom first.

So, since I don’t get sick (oh please, please, let this trend continue as I continue exploring the world!), I started to drink local water while on the road in Cuba. For one thing, I could often get it cold. When I asked for agua fría I would often be told they didn’t have it, but then if I said local, a bottle would be pulled out of the fridge. Nice and fría! I also had people fill my bottles from the sink, more than once. Sometimes it tasted awfully like chlorine, but as long as it was cold, I found it an improvement over the lukewarm bottled water. And, no stomach upsets.

Jo and Mtn Val both brought their Steripens with them. But these were not practical (for me to borrow) while on the road. We often didn’t stay together while biking (I’m hecka slow and always tell people to leave me and go on without me) and when we were together, I wouldn’t expect them digging in their panniers for a Steripen either.

If sink water is not your thing, other options include:

Refresco (here for 2 CUP or 8 US cents), which is homemade soda. Most likely made with tap water. Pretty good, but usually very sweet.

Or guarapera, sugar cane juice! Organic and all natural. 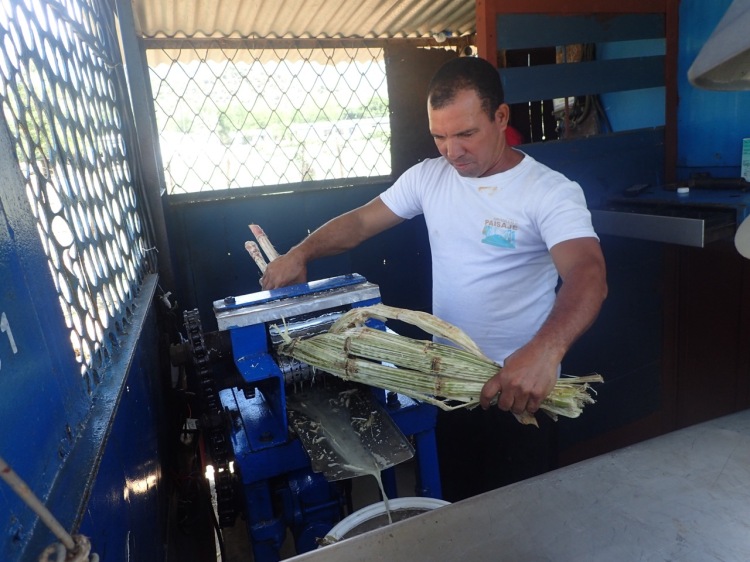 Sugar cane juice is made from sugar cane being squeezed through this giant juicer. It’s delicious and also super cheap (4 cents, maybe 8. Depending on where you stop). But also…  yes, it’s pretty sweet.