Going over the pass, Cuban hamburgers and getting ready for the road featured on dangerousroads.org

When you look on the map of Cuba, it looks like there should be a road going from Niquero along the coast to another coastal town, Pilon. But there isn’t. To get to Pilon from Niqero you have to backtrack and then go over a mountain pass in the Sierra Maestra.

For comparison, here is where the road would be in a more perfect world.

See Cabo Cruz in the lower left corner? If there was a road going along the coast from there to Pilon, we would have not only avoided the pass, but also been able to see the actual Granma landing at Playa las Coloradas, on the way to Cabo Cruz, where we were too lazy to go otherwise.

The mileage for that day wasn’t long, but the colors of the elevation on the map had me sweating more than usual. I don’t enjoy biking through the mountains. 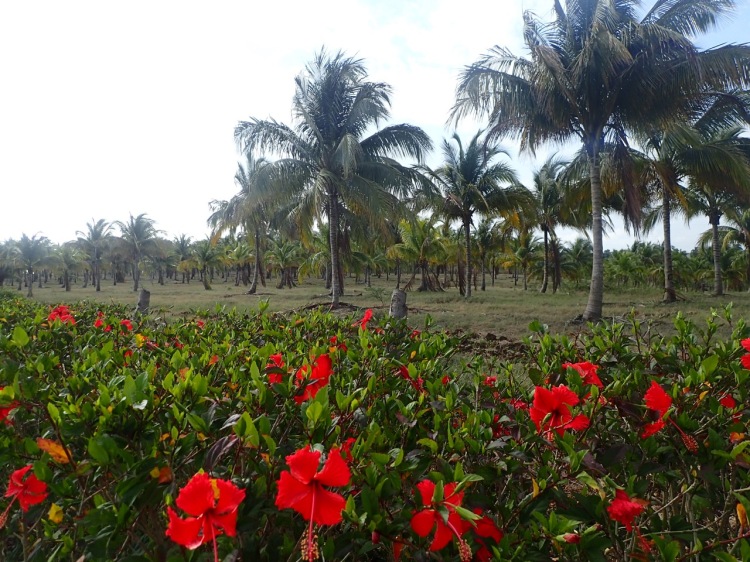 We started out by backtracking the 10 km out of Niquero, then headed for the road that leads to Pilon. We were told that leading to the top of the pass there would be several hills, not just one steady climb to the top (thank goodness for that!). But then, from the top of the pass to the valley near Pilon, the drop would be immediate. One long, long, long descent. Still worried about the viability of my brakes, I was stressing.

Say what you will about hills (not a fan!), it’s still true that the hillier the area, the more scenic it looks. As we started to gain in elevation, the monotony of the flat distances soon dissipated. 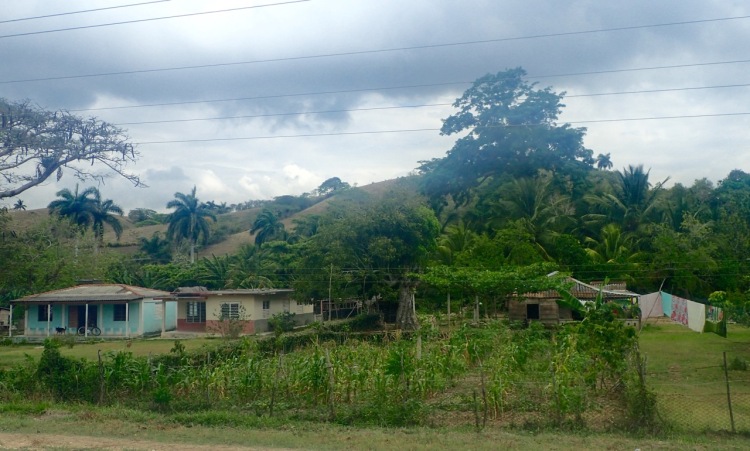 We were getting more and more into the mountains and it looked like it might rain, but it never did. 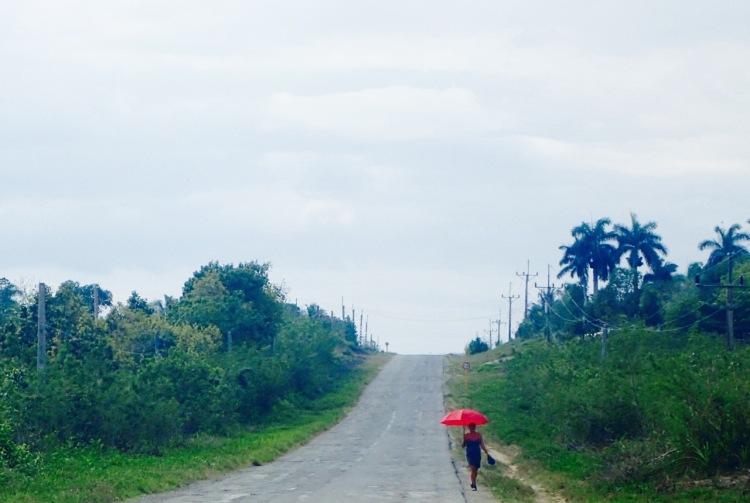 The roads were pretty good, but bumpy at times and we weren’t sure what to expect after each hill or around every turn. When biking the hills in Cuba, I’d advise caution. It looks like you can just fly down the hill, but don’t be so sure. It isn’t just the quality of the road you need to worry about. My biggest worry was free range livestock. 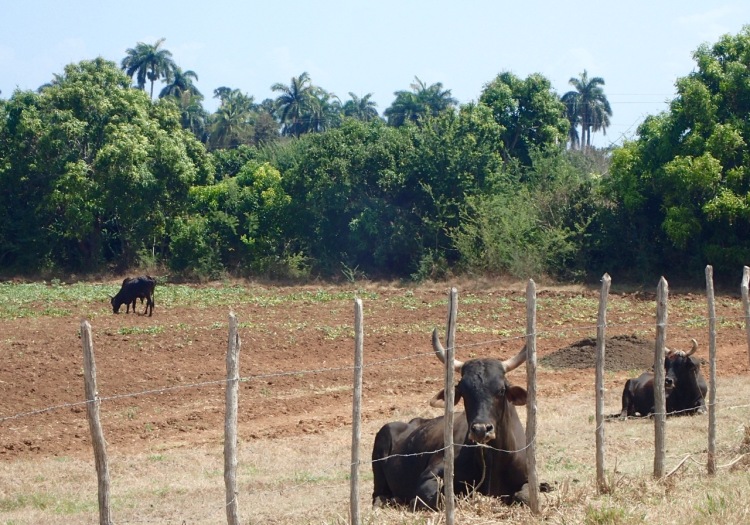 These guys are beyond the fence, but many cows will just roam the roads. They’re looking so smug because they know they won’t get eaten.

You know how much I love Cuba, but you also should know that I’ll do anything I can to dissuade you from going if I think you’re not a good candidate. Addicted to the internet? Don’t go (unless you’re ready for rehab). Like to get high? Definitely skip it (more on getting high in Cuba in a future post). Can’t live without burgers and a big juicy steak? Stay away! Because you won’t find any beef on the menu. (The “hamburgers” are made out of ham. Duh!)

Now, when I say there’s no beef in Cuba, I mean the real Cuba. I’m not including the all-inclusive resorts that are like these compounds on Cuban soil or the McDonald’s at Guantanamo Bay. 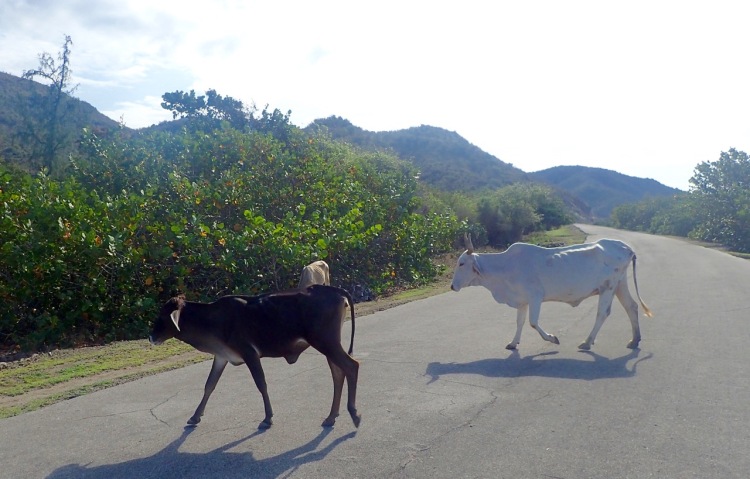 Cows in Cuba are either for milking or for working in the fields (these two roles are, of course, determined by their gender). You may have read weepy stories in western press of how slaughtering a cow in Cuba will land you in jail (hey! Slaughtering a cow in India will get you killed!) and how not fair that is. What’s even less fair is the blockade of Cuba and Cuba having to constantly allocate and reallocate their meager resources to make sure that no human is starving. Beef production is a resource vacuum. In the West we talk about it, but hardly do anything about it (although grass-fed beef is an improvement over corn-fed). Cuba actually does something about it, because it has to.

So there aren’t that many cows in Cuba. The ones you see look very self-confident, for sure.

Cubans, of course, eat pig and chicken. And also, goat. 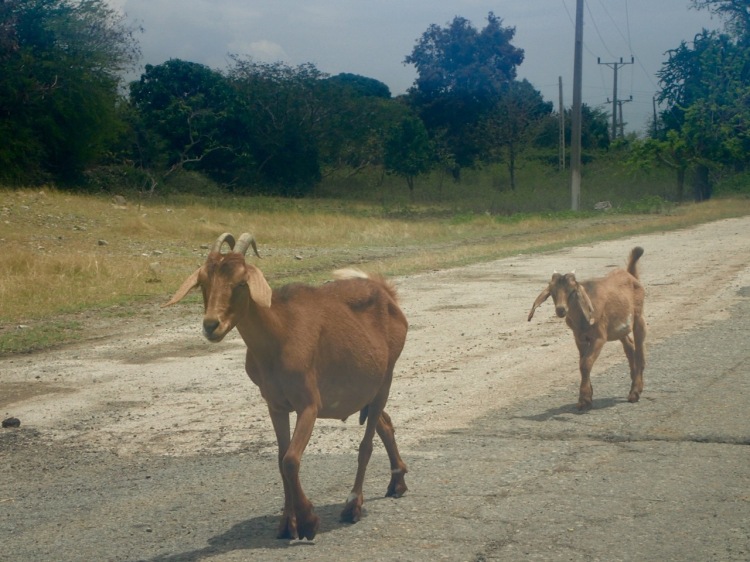 Goats are extremely cute, especially when you see nannies and their kids. If a kid gets lost, it calls to its nanny and the nanny calls back and it’s like an explosion of cuteness all around!

Goat may be the protein of country folk, but in restaurants we only saw it on the menu once. I wouldn’t eat it. I may never eat goat again. They really are that adorable.

But they’re also all over the Cuban roads, so be careful! 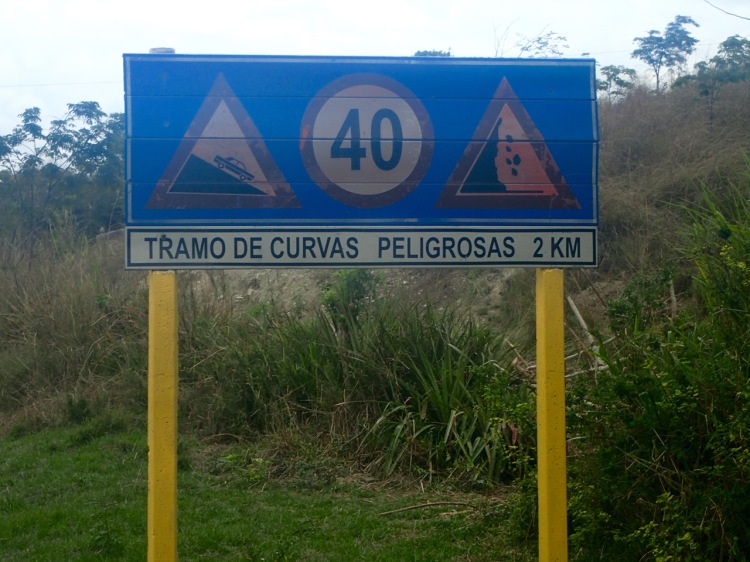 Lots of signs leading up to the pass told me that it would be peligroso. I’m no daredevil, so I was naturally worried.

The road from the top of the pass to the valley was very very steep. It was winding a bit, but it basically dropped 1000 ft in less than 3 miles. So it was scary. At the same time the quality of the road was fantastic. Sometimes the roads in Cuba are really good and then they stop being so good. Not over the pass! The road over the pass was consistently excellent the entire way down. I wish I bothered to stop long enough to take pictures of it. Next time I’m going back with a GoPro!

Carretera Nacional No. 20 was promising to be beautiful, but rough and quite isolated, so we decided to stay as close to its rough beginning as possible. Staying overnight in Pilon would have been fine, but then there were the two resorts in Marea del Portillo, about 15 km down the road. Staying in one of the resorts would save us 15 km of riding on the next day.

So Nedene called, again (she was the only one with a functional phone and also the only one who could actually communicate in Spanish over the phone), and made reservations for us at Club Amigo Farallon del Caribe. 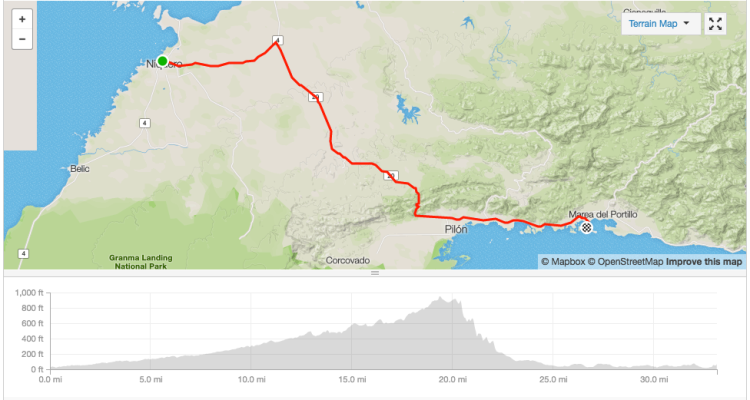