Today was our seventh day of biking without a break and I was feeling it. I don’t recall any physical pain anywhere; I was just tired. The sun was incessant and extremely hot and staying hydrated was still an issue. We biked through mostly exposed road, without any shade to cool us off. The tops of my legs were sunburned and I couldn’t reapply my sunscreen fast enough to keep them protected.

Also, on this stretch of the road: headwinds. We experienced some headwinds in the days prior, but on this day they were resolutely letting themselves be known. Although the roads were of excellent quality and the views were incredible, most of the day I just – head down -powered through it.

One thing about the Cuban roads that I haven’t yet mentioned is the pollution. Yes, Cuba is a cycling paradise, but only if you don’t have severe asthma (I have exercise-induced asthma. Whatever that means. For some reason I can bike through pollution, just not uphill). Catalytic converters, which are a must in the West, are a rarity Cuba. Trucks run on diesel and spew out black smoke. So biking through clouds of smoke was the norm. Especially as we were nearing Santiago de Cuba, the island’s second largest city. 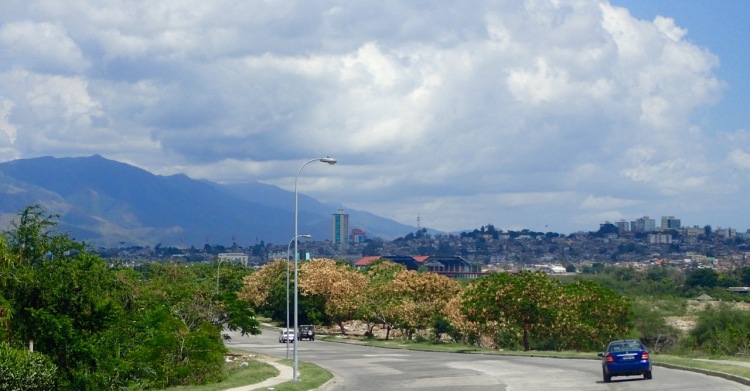 We rode into Santiago from the Refinery Road (Carretera de la Refineria), which was about as scenic as you can imagine. There was definitely a refinery there. Refinery Road aside, the city itself is in a beautiful coastal area, in the mountains.

Yes, the mountains. So beautiful to look at. So fun to walk on. So exhausting to bike through.

In Chivirico we stayed at a casa recommended by Manuel [Manuel Update: He’s now beginning to expand his business to include bike rental. So if you’d rather not bring your own bike to Cuba and want to rent one when you get there, contact him. Once again, you can email him: joanmanuel78@nauta.cu or call one of these numbers: 53934706 or 613388 (remember to dial the country code +53 and the city code 22)]. The owner of the casa met us on the outskirts of the town and we then followed him to his house. Similar arrangements were made for Santiago. The owners were to meet us at the main bus station.

The issue that day was that we (not Nedene and not Stuart, who are apparently machines and don’t get tired) were pretty late getting into town. Nedene beat the rest of us by about two hours. The owners of the casa sat on the side of the road, by the bus station, waiting for Mtn Val, Jo and me for those two hours (while Nedene already showered and settled in; not sure where Stuart was at this point). That’s one thing that always amazed me. Cubans never seemed impatient or annoyed at the fact that they had to wait for anything or anyone. Even if it took half of their afternoon.

We got to town around 3 pm, which was late by our usual standards. And we were beat. There was talk of biking to Castillo del Morro the next day (a castle about six miles southwest of the city center), but I already made my decision. I would be taking a taxi!