Have I mentioned already how I did my own laundry on the road in Cuba?

This may be obvious to other world travelers and people without washer and dryer at home, but I’ve been spoiled by modern conveniences. I also don’t care enough about my clothes to actually follow directions and I don’t hand wash anything. I throw it all in the wash and if it doesn’t survive, it wasn’t meant to be. So it took some courage on my part to actually put things in the sink and scrub and trust that I’m doing a decent job. I mean, I don’t think I smelled bad, so I guess it worked. But yes, this may sound absolutely ludicrous to many people, but this was my first experience with hand washing. Ever.

Our home in Santiago also had two roof bound dogs. I never learned their names. One was fluffy and very friendly and the other was a little bigger and a lot more shy. But it didn’t take long for me to befriend both of them.

I would visit them a few times a day and feed them my leftover pork sandwiches. Across the fence, on the next roof, was a sad doberman and I fed him too, so he wouldn’t feel left out.

I tried talking to Cubans about animal rights. But I think people are still too preoccupied by people rights to really pay a whole lot of attention to animals. I think you need to be pretty comfortable knowing that you have food security, before you really start to think more about how the dogs and horses are treated. But that doesn’t mean that I wasn’t often disturbed by the seemingly obvious abuse of horses (they work so hard!  and most are so skinny!) and by so many homeless dogs. These dogs here had shade and water up on the roof and they were getting fed, while many of the dogs on the streets were obviously homeless. No one seems to spay or neuter their animals and when I asked about that I was met with a horrified: “castration?!”. Ummm….? Yeah. Castration over starvation is my motto!

Anyways, I would love to see Cuba improve its animal rights record. Cubans have come a long way when it comes to human rights. They’re pioneers in the LGBT rights, women’s rights, workers’ rights. So how about the doggies next….?

Here’s our casa in Santiago de Cuba (and one of my pups up on the roof!). The owner, like so many Cubans you meet, was this highly educated man, with degrees in biophysics or something. He’s traveled to so many different countries and was showing us pictures of him in Germany and in Angola and in Iran, etc.

I think there is a whole lot of misconception over Cubans and their ability to leave the island. In the West (i.e. U.S.) it’s assumed that Cubans aren’t allowed to leave. This is so not true… I’ve met plenty of Cubans who travelled overseas. Most people on the plane with us (flying to and from Cancun) were Cubans (I know, because I like to sneak a peek at people’s passports while in line for passport control). Apparently, what Cubans need to leave the country is the same as what other nationals need all over the world. Money and visas.

So, our day in Santiago began with a stroll through town. As I mentioned in my previous post, I was getting lost quite a bit. The best I could do is try to find my way towards Parque Cespedes, which was my anchor.

I had a grand plan to take a walk through town following this map from the Lonely Planet:

I didn’t do it though, mostly because I was lost most of the time.

Instead, Nedene, Jo, Mtn Val and I took a cab to the El Morro, a castle on the outskirts of town. We were originally planning to bike there, but I vetoed that notion and somehow no one else was motivated to take their bike out either.

It’s not the kind of castle where princesses once lived. A very Caribbean looking fortress (reminiscent of the old walls in San Juan, Puerto Rico), it was built in stages beginning in 1638.

It’s a multi-level structure, built on a cliff overlooking the bay.

I’ve been to this castle three times now and I think I know it pretty well. There are areas swarming with tourists, where it’s nearly impossible to get a decent picture in without someone getting in the frame.

But if you get the chance to visit El Morro, here’s a tip that will get you far away from the crowds: see that bottom door on the right? (picture above) There are stairs there. Go down the stairs. At first it may look like you’re going into a basement, but they actually lead you outside.

These are the outside stairs. At this point I had the place to myself. Most people either never find the stairs, or don’t want to bother walking down (because later they’ll have to go back up). 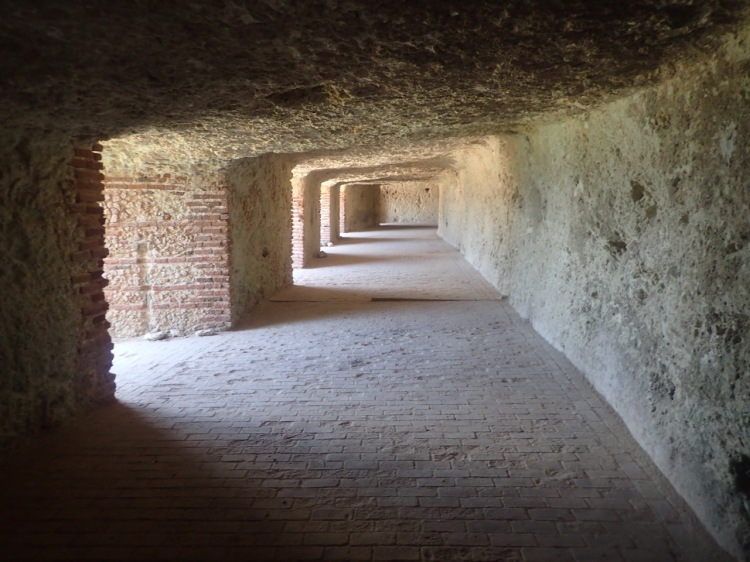 There are some cool spots down below. Cool, because no one’s there and cool temperature-wise. 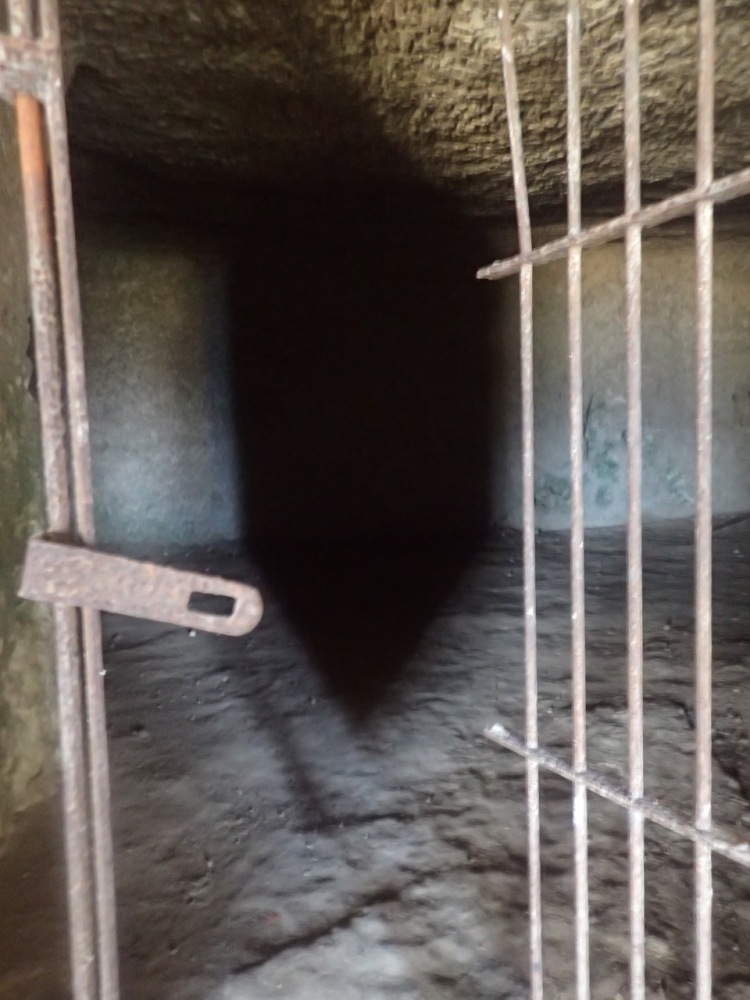 I even found one corridor that was open and not lit. I could’ve explored it if I had a flashlight. An underground dungeon! 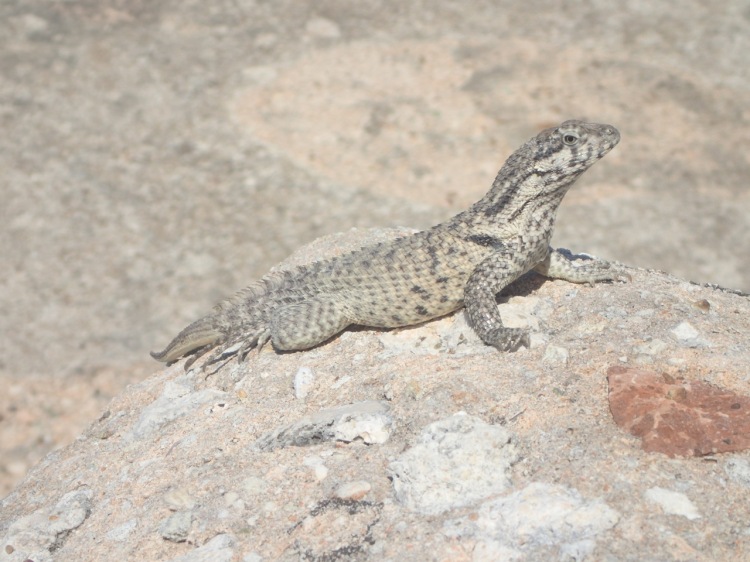 Some neat lizards down there too. They don’t make it up the stairs. 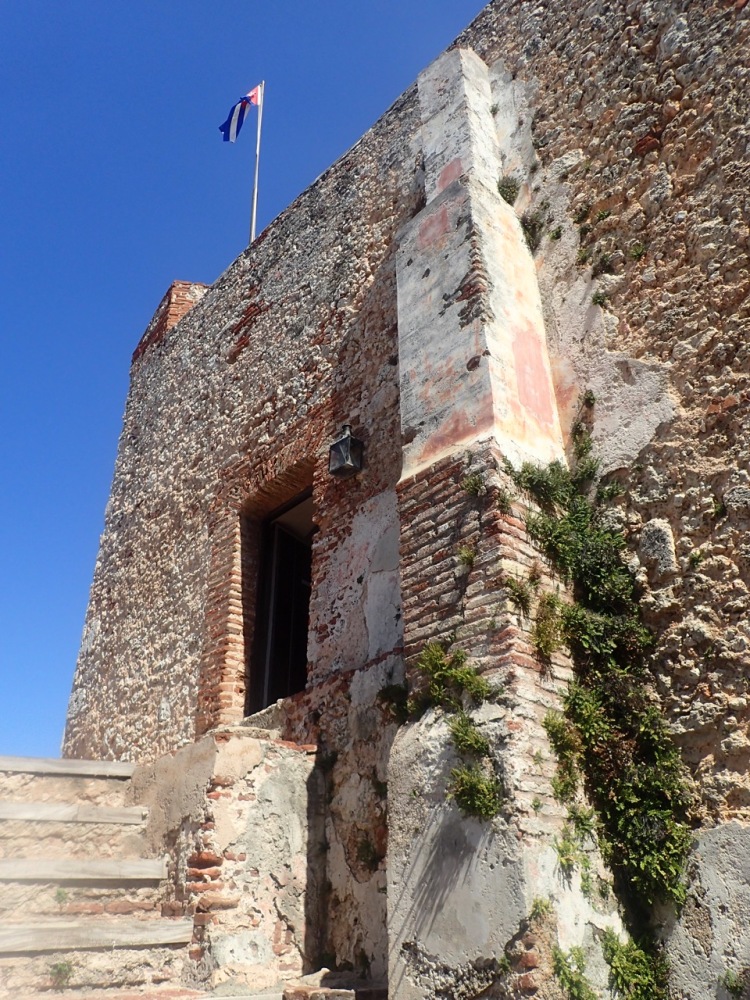 Thinking back to El Morro, I’m reminded of how most of Cuba functions on an honor system. So, when you enter some place like a castle or a museum or even an old historic cemetery (there is one in Santiago and another in Havana), where you should pay to get in, often times it’s hard to find the place to pay! El Morro had a table set up at the front, but in many other places it’s sometimes hard to find the cashier. So it’s up to you, the patron, to make sure you’ve paid… I’m sorry to say I toured the cemetery in Havana (mostly because I was looking for a bathroom) without paying and only figured out there was a place where you need to pay while I was leaving!

Also, at many of these places there are two ticket prices for foreigners. One if you want to take pictures, and another if you don’t. I’d always pay for the pictures, because that’s what I do, but I’ve seen other people not pay for pictures and then take them anyway! Karma people!!! Anyways, the point is that the whole scheme runs on honor system as well. No one was checking if I paid for the picture taking. I didn’t get a ticket saying I could take pictures or anything else to prove that I did.

That’s just an FYI. Definitely, pay what you owe while in Cuba! It’s all going towards education or healthcare.