Worley, of which I have no pictures, just memories, is an adorable little town! I loved Plummer as well. Very cool and very native.

I once argued with a Dutch couple, in Finland, about the “cultural monotony” of the USA. This couple never traveled to the States because they concluded, before even setting foot in this country, that it was a monolith of culture. There was no diversity. It was all the same. The whole damn continent. Well, this just tells you that the Dutch can be just as ignorant as anyone else who forms an opinion about a place before actually experiencing a place.

United States is not monotonous. There is so much cultural diversity here, so much regional richness! If you visit the South, it’s completely different from the Northwest or New England or the Southwest. Sure, there is Walmart just about everywhere (not in Seattle; thank you Seattle city council), and McDonald’s and whatever other stereotypical mass produced American crap commodity you can think of, but there are also regional differences. And don’t forget that this country is a more of a melting pot of cultures than any other place on the planet. Sure, the Anglos sometimes act like they own the place, some even want to “make America white again” (whatever the f*&^k that means; America was never “white” to begin with. That’s the loveliness of this country, fucktards), but there is a richness of regional cultures that could be easy to miss sometimes. But not when you’re on a bicycle!

I loved both Worley and Plummer. Both are towns on the Coeur D’Alene reservation and when you’re there, you know that you’re on the reservation. So please, Dutch couple, don’t tell me the States are a monolith of culture.

The trail starts out by descending a little over 500 ft. It’s a slow descent (thank goodness. Because coming back it’ll be an ascent) and it’s beautiful from the very start.

This trail is a national treasure. It’s so well maintained and the route takes you through some of the most beautiful countryside you’ll ever set you eyes upon. I mean it. It was breathtaking. Also, very well supported. There are bathrooms every few miles, benches, picnic tables and plaques full of information about the local flora and fauna.

You go down, down, down, for about 7 miles or so. Then the trail evens out. At about mile 8 there is an amazing bridge that’s graded on both sides. You go up in waves and come down in waves, on a stair-step ramp. It’s suppose to be wheelchair accessible, but the waves make it also very easy to go up (and fun to come down) on a bicycle.

At mile 16 is a little town of Harrison. There is a tiny park here and some stores. There are a few restaurants and an ice cream shop that sells the largest scoops of ice cream in Idaho! They also host a raffle for the local ambulance. The prizes are all guns. (The irony. I know.)

I’m not a huge proponent of guns. But look at it this way: guns are an American tradition. They’re like the chocolate to the Swiss and beer to the Belgians and matryoshka dolls to the Russians. Don’t mess with tradition. If Idaho residents love their guns, let them love their guns. I mean, keep the guns out of the hands of crazies, but if someone is living in a part of the country where their trash is regularly raided by bears, they need guns. I usually cringe when I think of guns, but being out in bear country, sometimes I almost wished I had one. (Not sure what I’d do with it though…  Probably just scare the bear. I’d wave it around.) 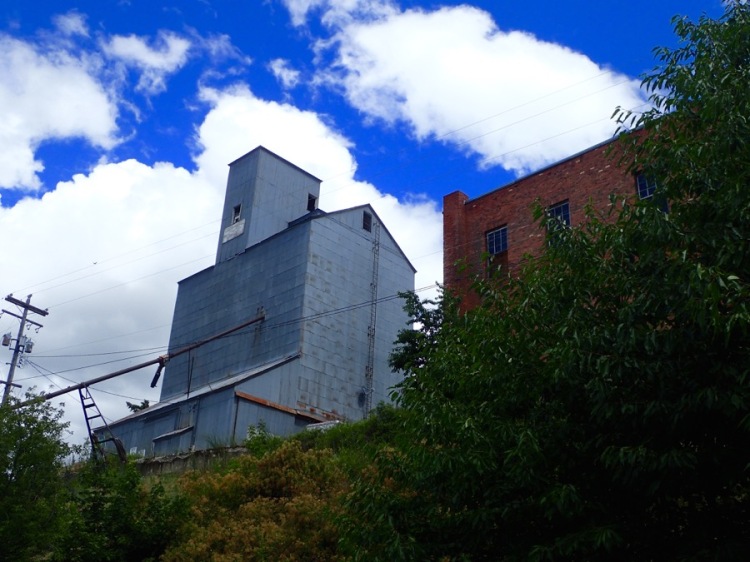 Harrison was the last town we saw until Kellogg. That’s close to 40 miles away. If you’re planning on biking on the Trail of the Coeur D’Alenes now would be a good time to eat, stock up on any snacks you may want, water, etc. 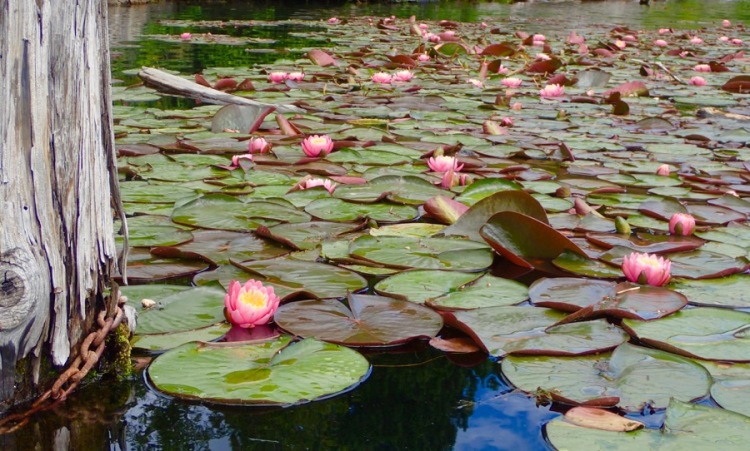 From Harrison on the trail gets only more beautiful. There are many lakes (this is the Coeur D’Alene chain-of-lakes region) in this area. The largest one, of course, is the Lake Coeur D’Alene, but there are lots of little lakes too. There is the Blue Lake, Black Lake, Swan Lake and many others. I can’t find the exact number online, but there was a plaque on the trail talking about all the lakes. I think there are 12 or so!

And lots of wetlands abundant in wildlife. This heron was busy hunting! 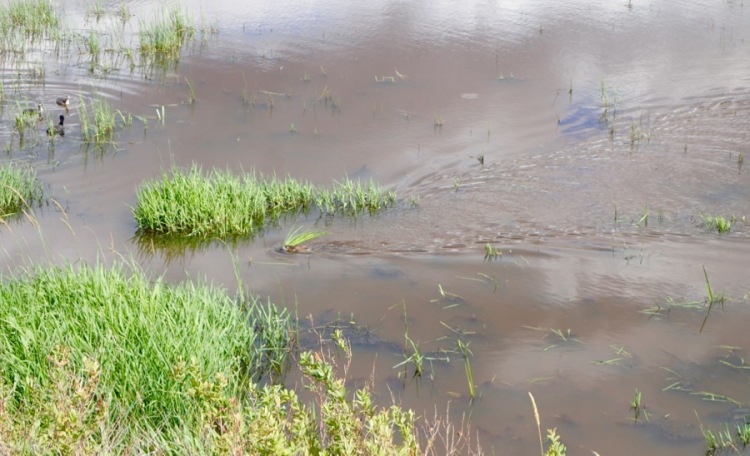 We also saw a water mammal, but weren’t sure what it was. It was carrying a clump of grass and then it disappeared somewhere in the thicket of the greenery. We assumed it was either a beaver or a muskrat. Then we found a plaque along the trail that compared the different water mammals to each other and we concluded it was most definitely a muskrat. Did you know that beavers are between 30 and 80 lbs! That’s about the size of our dogs! So no, this rodent was nowhere near 80 (or even 30) lbs.

I saw six snakes that day. This one looked like it had blue eyes! I told my friend Lena about it and she said that most likely it was getting ready to shed. I looked it up and she was right! Blue eyes are a sure sign of a snake that’s about to shed. 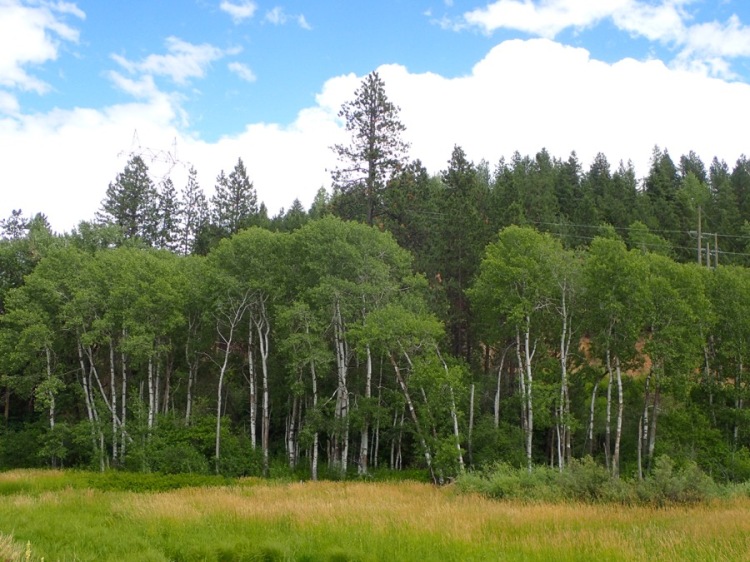 Lots of beautiful birch trees in this part of the world. At least I think they were birch (I get birch and aspen confused sometimes). 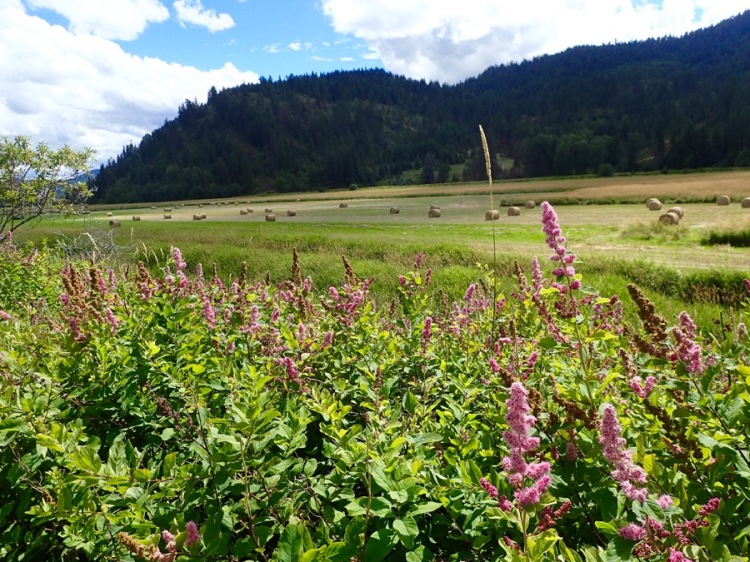 Just a lovely, lovely ride. This first day on the road in Idaho was spectacular. 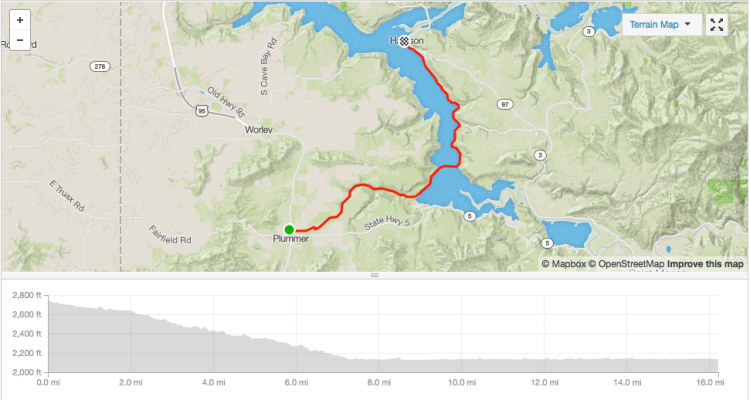 I stopped my Strava in Harrison, where we had lunch. 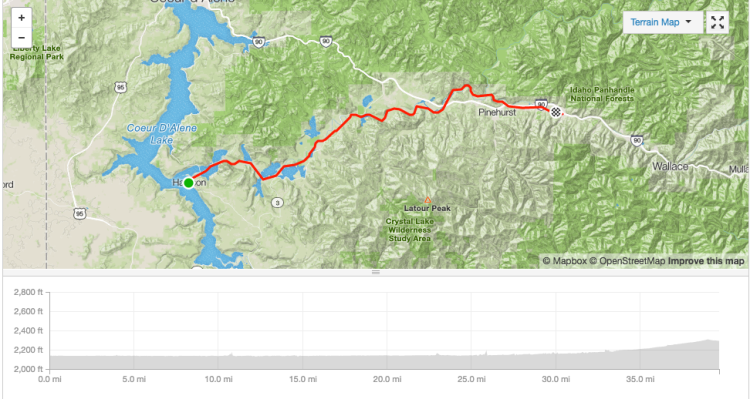 One thought on “Trail of the Coeur D’Alenes – Day 1”