Paradise at Mt. Rainier on a sunny weekend in July, with not a cloud in the sky, may not be the best idea. But, who knew?!  (I say, go on a Monday or a Tuesday. Hopefully, it won’t be as crowded).

We (Megan, Jae, Kate, Kate’s boyfriend and I) wanted to do a medium length hike, with great photo opportunities, from Paradise and after looking at the map we decided to do the Skyline Trail. The trail starts out right behind the visitor center. The beginning of it is paved (again, agh!) and extremely steep.

The fact that the trail is paved makes you wonder if it’s suppose to be wheelchair accessible, but goodness gracious! Try pushing anyone up that incline! I’d say that the very beginning of the trail, until Glacier Vista, where you first start seeing snow on the ground, is the worst. Not only is this a very steep trail (and it’s paved! Is it just me, or is walking on pavement somehow more difficult when you’re going uphill than taking a dirt trail? It seems that on a mountain trail there are roots and rocks to steady yourself on, but on pavement there isn’t much to hold on to), the very beginning is also insanely crowded! And you know what some people do, in the middle of the trail? They stop to tie their shoes!

Eventually, the crowds begin to thin out. Not everyone has the gusto to keep on going, so by the time you get to Glacier Vista, the trail becomes more manageable. Eventually, the pavement stops. And soon…  It’s Xmas in July!

I’m not sure if all of this snow sticks around year round. I’m pretty sure that past Panorama Point the snowpack is permanent (you’ll need snow climbing shoes, an ice ax, hiking poles and all that other snow climbing gear if you’re planning on making it over to Camp Muir). But, this second to last weekend in July, there was still plenty of snow to play in.

Plenty of these glissade chutes along the route. Near the visitor center it seems like the ranger patrol will get you even if you pick up a rock, but as you get further out, the rangers let the people be. I mean, who can resist snow in July! I didn’t slide down on my behind, but everyone else in our group did. It’s the thing to do on this part of the trail.

When you’re out on the snowfields, be sure to keep an eye out for these crevasses that form underneath. If you hear running water, stay away. The water will create a crevasse underneath the snow and you don’t want to be breaking through that layer of snow.

The higher we climbed, the more incredible the views became. I’m starting to think that maybe someday I would like to get up to Camp Muir. I’ve seen pictures taken from the camp and they are breathtaking! But even from Panorama Point you can see (on a clear day like this one) Mt. St. Helens, Mt. Adams and Mt. Hood. It’s striking how different Mt. Hood looks from all the other volcanos in the area. It’s very pointy, while others are round. I tried to find some explanation for the difference, but no luck. My googling skillz are failing me. 😦 All I found is that they’re all (Mt. Hood included) stratovolcanoes, in the same range and volcanic arc. Next time I run into a proper geologist, I’ll be sure to ask about that! 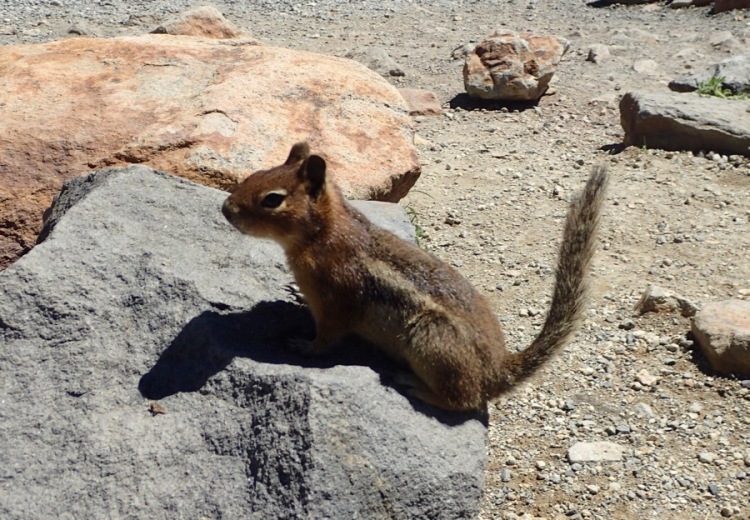 A disappointing showing of wildlife during this hike. A few begging squirrels was about it. No bears, no goats, no marmots. It was hot and crowded on the trail, so maybe that’s why they were in hiding.

Despite the crowds, the less than ideal trail conditions (yes, I will continue to complain about the pavement), having to walk through snow (good and bad. Good, because it’s snow! Bad, because not everyone’s shoes were ideal for the snow and getting through it wasn’t easy) and not seeing any bears, it was such a wonderful hike! The views from the mountain are incredible and I feel like the pictures can’t do them justice. At least not my pictures. I can’t wait to see Kate’s! 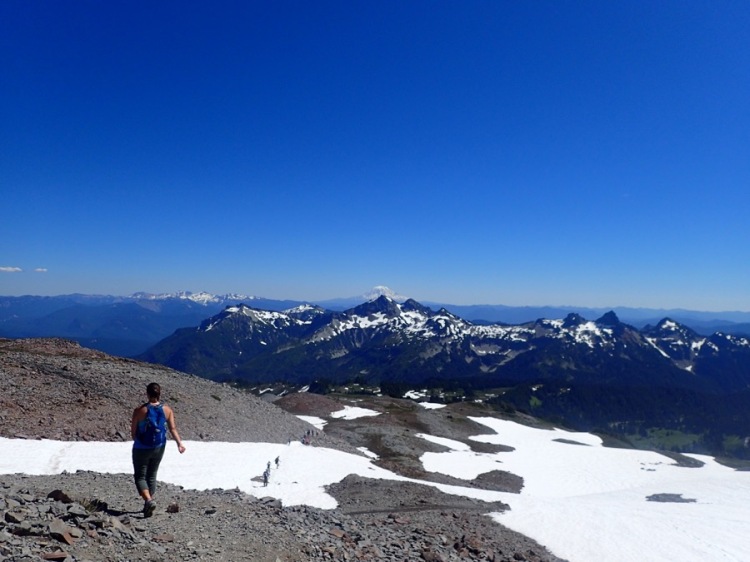 This was not a very long hike (around 5 miles) and the elevation gain on it wasn’t that considerable either (a little more than 1500 ft), but I felt it! One theory is that we weren’t able to develop a proper cadence until much later on the trail. Too many people to yield to and get around! It was all these short bursts of hike and then a stop because of a traffic jam. That must have been one reason why it felt a lot more strenuous. And despite walking in the snow, the air temperature must have been close to 80.