We spent the night in Wallace, so we had a long day ahead of us. No more overnight stops until getting back to Plummer, over 60 miles away. 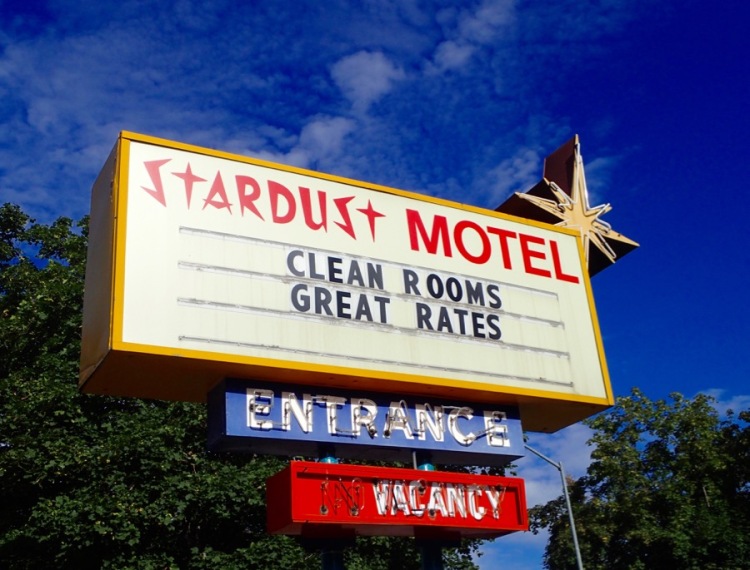 Normally, I’d say that 60 miles is one day is not extreme. It’s doable and really not all that difficult, especially when the trail is mostly flat. But we had two really hard days behind us at this point. 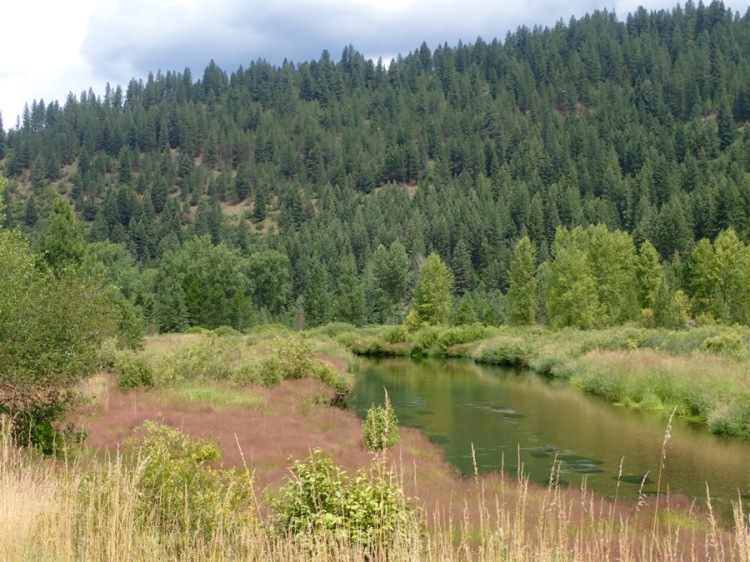 My arms, which took quite a beating on the ride down the Trail of the Hiawatha the day before, were killing me! I took four (800 ml) ibuprofen in the morning and then kept popping them throughout the day. 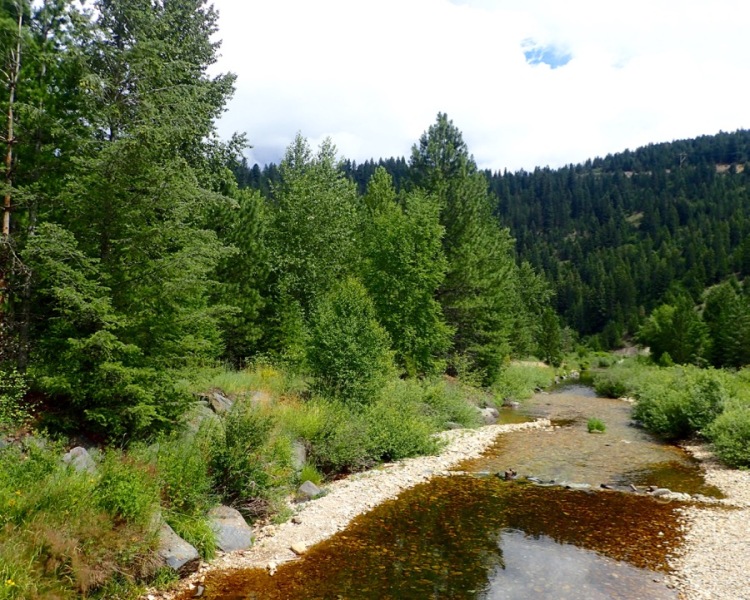 In Wallace the weather looked like it was finally clearing up. We had two dark, cold and windy days before, but now, on our final stretch, the weather promised an improvement.

So we started out in Wallace, biked through Kellogg (where Dave grabbed a mocha at one of the last espresso stands for a while!) and continued on. 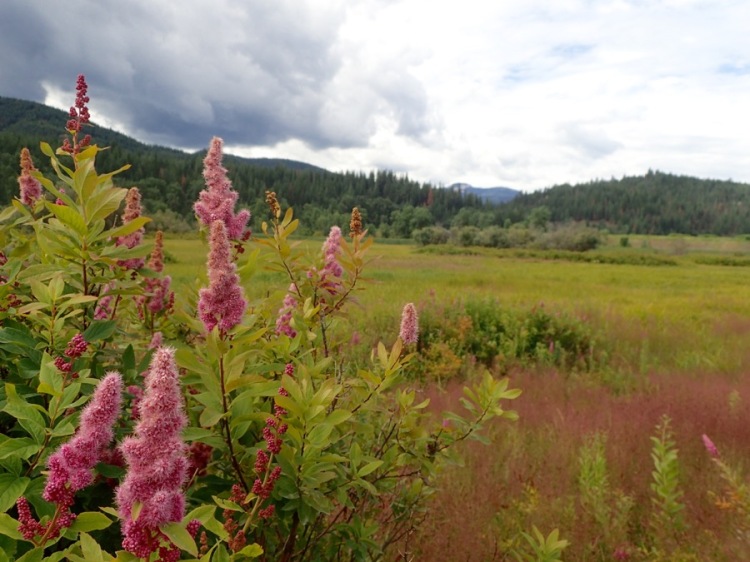 The trail is not as tranquil from around four miles outside of Kellogg until the end of the trail in Mullan, because it pretty much follows the highway. So you just have to get used to hearing the constant stream of cars. But then, four miles outside of Kellogg, the trail veers off away from the highway and becomes this lovely, blissfully silent path through some of the most beautiful areas of Northern Idaho. 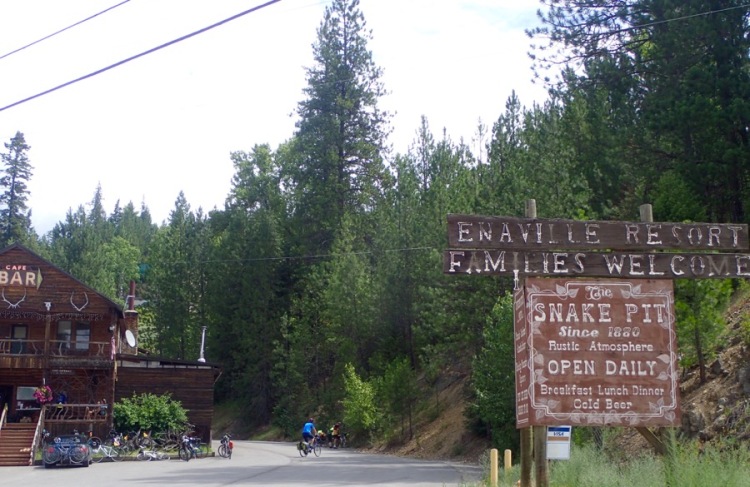 Right around where the trail finally gets away from I-90, is The Snake Pit, a historic restaurant, established in 1880. It’s been through a few changes since the late 19th century, for sure, and now serves delicious barbecue and other American kitchen staples. We grabbed sandwiches here, for the road, and continued on our way (this is your last chance to get food before Harrison). 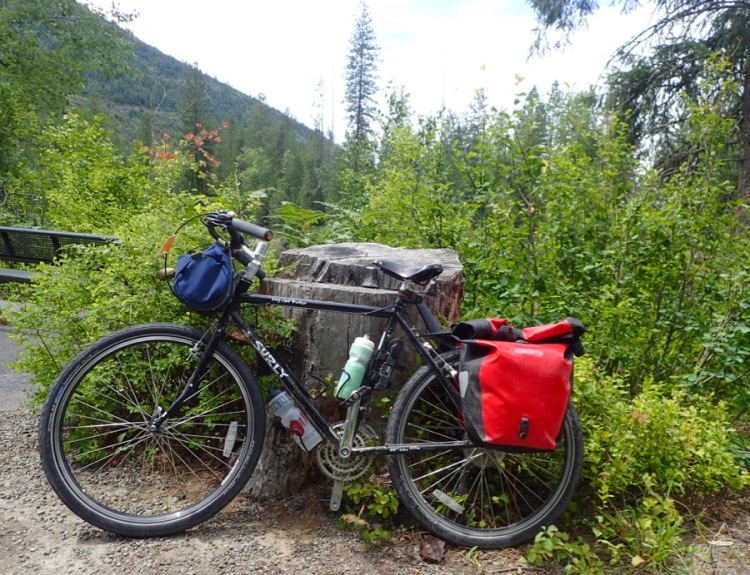 Soon after our lunch stop, we noticed the dark clouds (which were over in the periphery of the sky for most of the day) gathering more and more and threatening to ruin our tranquil afternoon ride. 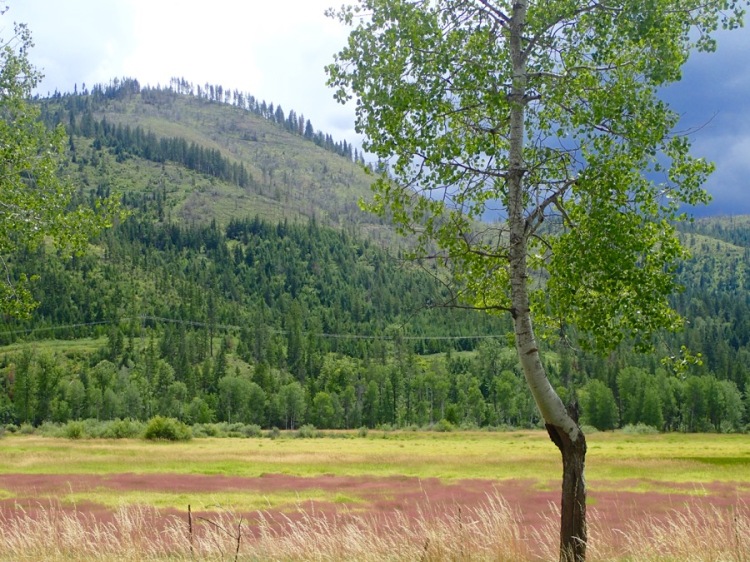 At this point, regardless of how tired I felt, I was determined to pick up the pace and outrun the storm. Thick rain drops started to fall here and there and I was afraid of a full blown downpour. We put on our jackets and pedaled as fast as (I) could. 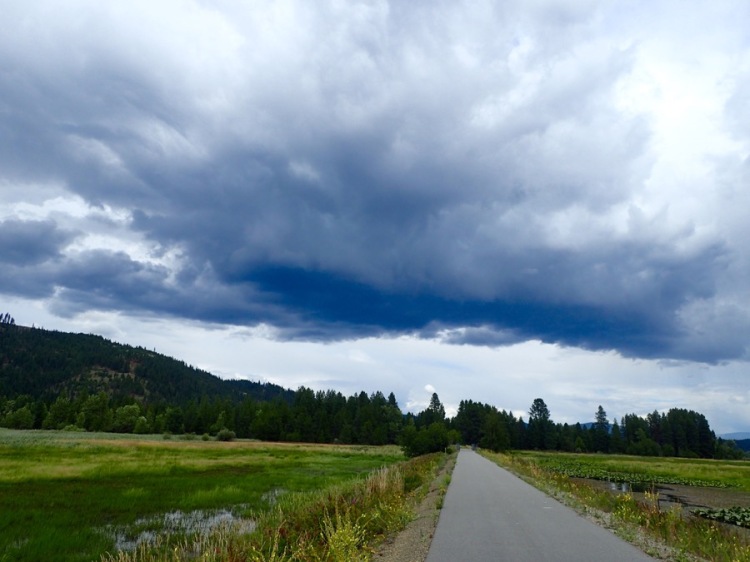 Lots of headwinds during this stretch. But I’ll take the headwinds over a downpour (with lightening and thunder, which we could now hear as well)!

It just so happened that the headwinds we were struggling to get through were pushing the thick storm clouds back away from us, so thank goodness for the headwinds! Soon enough we took off our rain jackets. We were so glad to have outrun the storm! 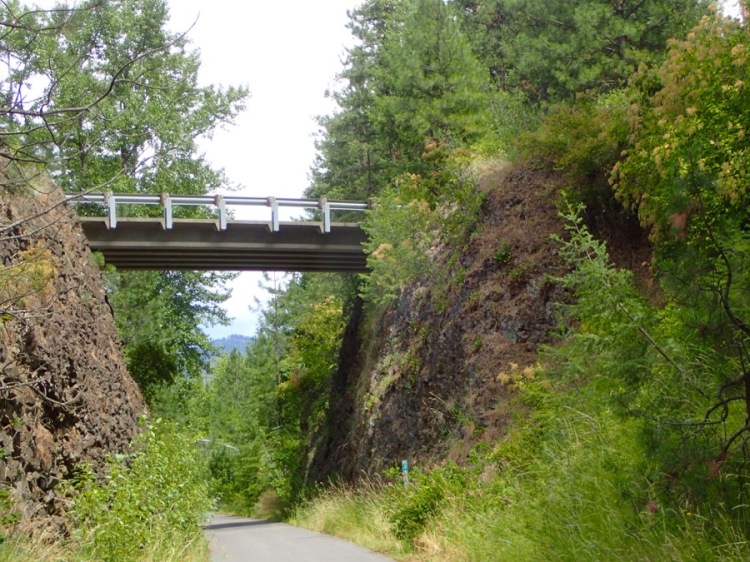 After the wetlands, the trail weaves through canyons. 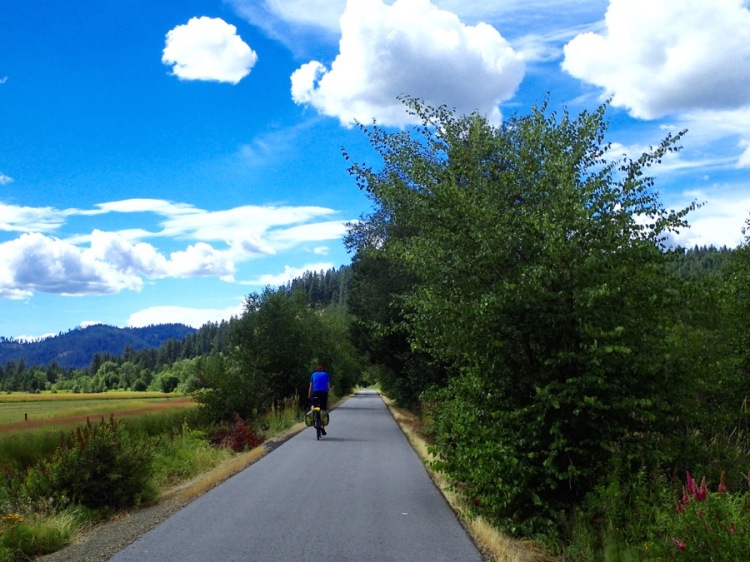 By the time we were nearing Harrison, I was feeling pretty tired indeed. Still appreciating the beauty of the area, but also wishing we could stretch this ride for a bit. Spend the night in Harrison and then continue on to Plummer? 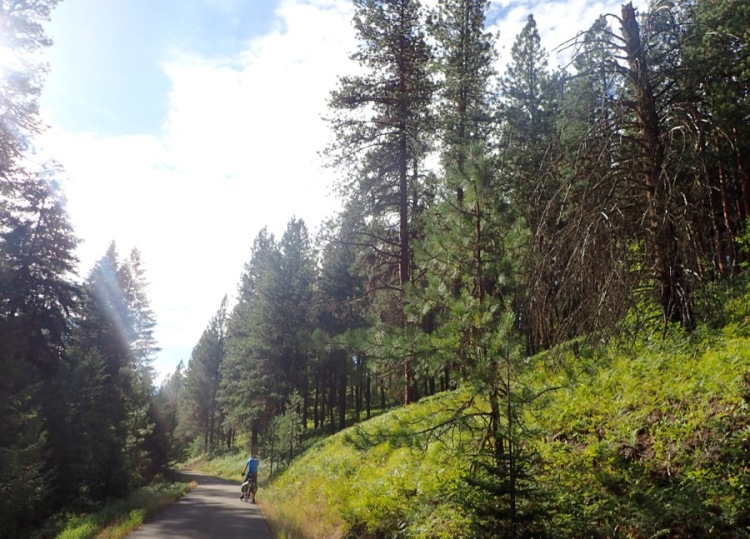 It’s only about 16 miles between Harrison and Plummer, but this is also where the trail soon starts to climb back up. The last 6 miles are all uphill. The trail is still gorgeous, but now I slowed waaay down. The ascend is gentle and doable, but also a rather grueling finale to our four days on the road. 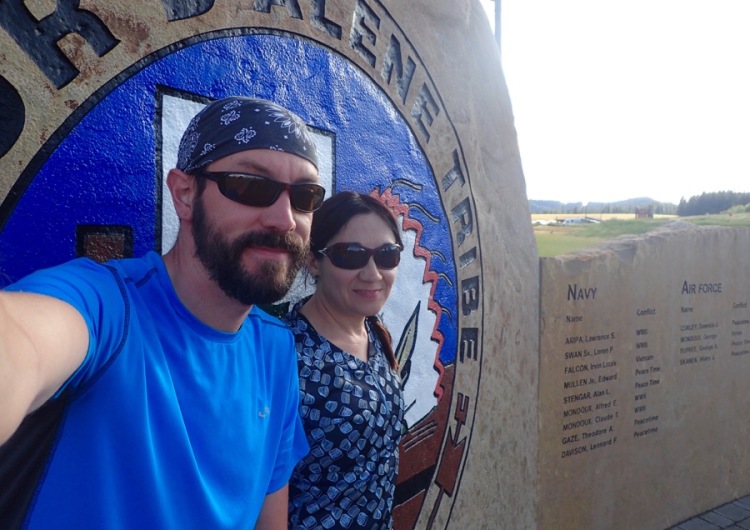 We made it! Back in Plummer, Idaho. 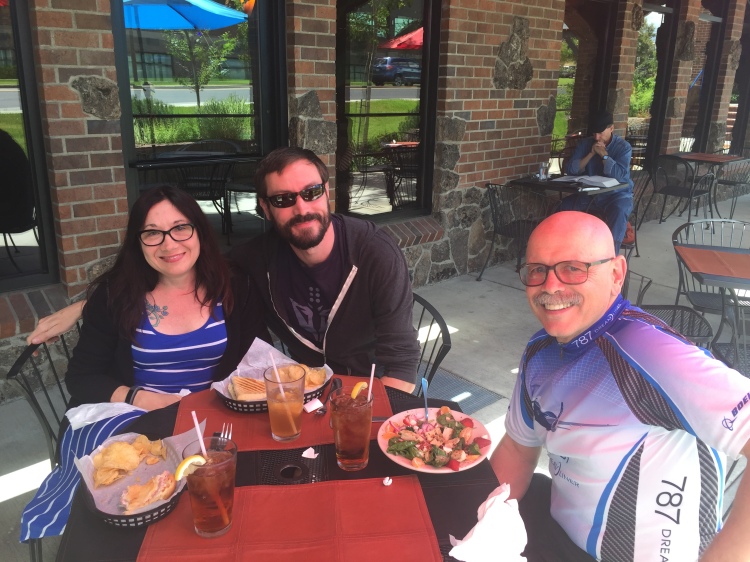 It was a great four days on the road, which I wish we could’ve stretched a bit longer. On the way back, Dave and I stopped in Spokane and met up with Garry. We told our stories and heard more about his epic adventures (he recently completed the entire Great Divide ride!).

My take away lessons from this trip: 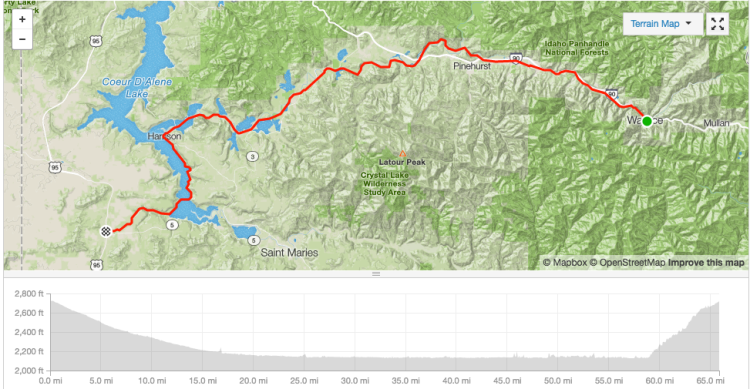 Today’s Ride: 65.8 miles, 1,138 ft of elevation. (this is what Strava recorded. I think it was being overly generous with the elevation…  I would say that the gain was no more than 800 ft, but exhausting nonetheless)

One thought on “Trail of the Coeur D’Alenes – Day 4”