Here, in Seattle, snow is a rarity. It snows maybe once or twice a season, but most of the time it’s just a dusting. Most of the time it doesn’t even stick. And if it sticks, it sticks for a couple of hours and then it quickly melts away.

But this morning, Seattle woke up to a real winter wonderland!

It was a Monday, yes, but it was also snow day! In Seattle this means that all the schools were closed and most businesses closed as well. Megan had no work, so she decided we should go snowshoeing.

If it was up to me to drive, I would have never left my driveway today. Megan, on the other hand, having grown up in Alaska, is not afraid of snow. Granted, we got stuck twice, but with the help of some plastic floor mats and a nice good Samaritan couple who stopped and pushed us out, we did okay!

To get out of the city, we got on I-90 and headed east, thinking we’d make it to Snoqualmie Pass. The pass – however – was closed. The snow was coming down pretty hard and so the highway closed at exit 34. We turned off at exit 32.

Megan suggested we should either walk the John Wayne Pioneer Trail (great for gravel road biking when there isn’t a foot of snow on the ground) or hike up to Rattlesnake Ridge. I said I was fine with either, but secretly dreaded getting up to the Ridge. Fear of avalanches was one deterrent (although Megan said that the mountain is not prone to avalanches. I trust Megan, but sometimes it’s better to be irrationally safe than not) and another was the fact this is not an easy hike even when you’re just wearing hiking boots! It’s not super hard, but I’d rate it moderate. And in the snow even walking down my driveway took some effort.

After not that much deliberation, we decided to start with a walk around the lake.

The lake was so beautiful! So gray and mysterious! The tree stumps, the slushy surface, the snow covered trees all around us and fresh thick snow that was coming down in buckets, really made it for a neat walk. 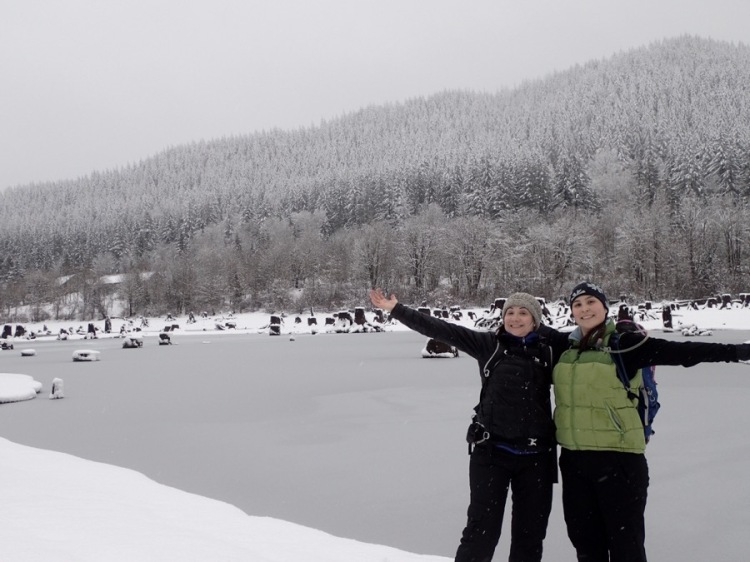 It wasn’t a super long walk. We made it around the lake in less than an hour. Megan (from Alaska) never even put on her snowshoes, because she wasn’t sinking in above her knees. I put on mine, although on inclines they seemed to be more of a hindrance than help.

After we completed the loop, the snow was coming down even harder. And now it was accompanied with a side wind. I felt like I just covered half of the Yukon Territory and was ready to hunt down a seal with just a spear. Hard to believe it was only noon.

We called it quits after the loop, but overall, this was such a beautiful outing! And look, we even walked on water. 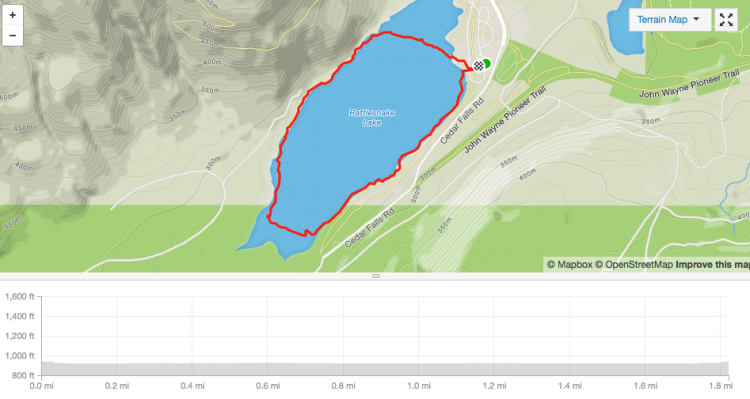