This time of the year is always the hardest for me. January and February are usually gray and cold and not festive in the least. The days are getting longer, but not noticeably longer. Which is why I try to force myself to get out of the house as much as possible.

When I moved from Seattle to Scandinavia, I erroneously assumed that I’d be leaving the gray winters behind and we’d finally have snow! But alas. Not in Denmark. It’s a lot colder here, it snows from time to time, but it never sticks and the first three and a half weeks in January were sunshine-free. Until… Saturday! The sun finally made an appearance!

Caitlin and I took this rare opportunity to do some city exploring. One day, when googling “hiking” and “Denmark”, I found a Danish walking society. This group organizes walks from 5 to 20+ kilometers long. Some are urban and some are not. This one was to be short (under 10 km) and definitely urban. The aim: to find Copenhagen’s mermaids.

[I already wrote another post, on another site, about all the mermaids we found. If haven’t already, read about them here.]

We started our walk at the Østerport train station and headed towards the water because that’s where mermaids live.

Along one of the piers north of Kastellet (the star-shaped fortress), there is a sculpture garden created by Bjørn Nørgaard. He’s a provocateur, so if you want to feel provoked, this is a good place to visit. His Genetically Modified Little Mermaid sits on a rock nearby.

From here we headed back down towards Kastellet, along the water. There are two more mermaids here, but instead of mermaids here is a picture of a bear statue.

Here is a glimpse at Kastellet. Lots of people run the star-shaped trail around the fortress and one of these days I will too…  Or, I’ll just walk.

Heading southward, we eventually came to Amalienborg. This is a cluster of four palaces. In one of these lives the Queen and her husband, Prince Henrik. In another, crown-prince Frederik and his family.

This is the place to go if you want to see the changing of the guard.

We continued on from there towards the Black Diamond – the city library. We found another mermaid just outside.

Our mermaid walk was 6.5 km (or 4 miles) long. We got to see quite a bit of the city, discovered a few new corners we haven’t seen before and enjoyed the fair weather. 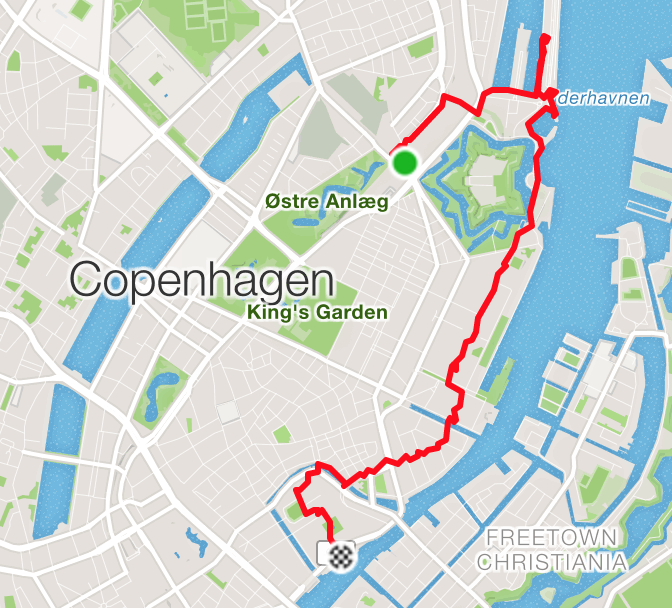 3 thoughts on “Looking for Mermaids with Caitlin”